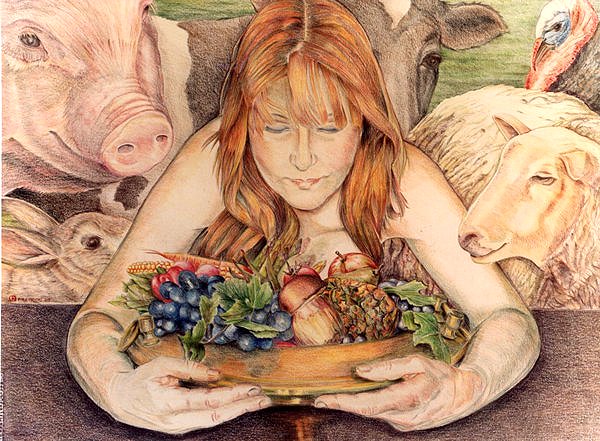 How can you say you’re trying to spiritually evolve, without even a thought about what happens to the animals whose lives are sacrificed in the name of gluttony?”
Oprah Winfrey (on her blog, June 2008)

To understand why I am Vegan, please take a few moments to click the following link and read the pages there:

Animals are my friends, and I don’t eat my friends – George Bernard Shaw

My main thought on living a vegan way of life is that I have no wish to cause any creature to suffer and die in order that I may live.  How arrogant would that be?  Especially when there are so many alternative and simple ways to live…

Ask yourself this:  Would you put a human child, perhaps your own, through the pain and torture and suffering that livestock are subjected to in their thousands every single day?  Unthinkable isn’t it?  So if your answer is no, then please think again before you bite into your next burger or little lambs leg.  Many of those beautiful animals who suffer and die just because we want them to, ARE  babies and children!

We often pray for the animal kingdom while at the same time sentencing our fellow creatures to a terrifying and painful death.

Just because something has been a certain way for years, doesn’t mean that it always has be that way.  They used to burn witches, or hang people, even children for stealing bread when they were starving.  Today, those practices are, very rightly, seen as barbaric!

In the same way, harming and killing animals for food, especially when there are so many wonderful alternatives around is unthinkably barbaric to me!

To quote Gandhi – “We must BE the change we wish to see in the world”… and so, I am Vegan.

There is so much I could write here, but probably not many people would read past this point anyway.  So I will just add a few quotes from learned people, both ancient and modern, and hope that this sad page may make at least one other person think deeply enough to see the truth – that meat really is murder… 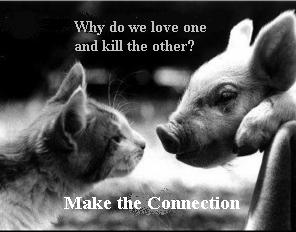 You have just dined, and however scrupulously the slaughterhouse is concealed in the graceful distance of miles, there is complicity.  ~Ralph Waldo Emerson

One farmer says to me, “You cannot live on vegetable food solely, for it furnishes nothing to make the bones with;” and so he religiously devotes a part of his day to supplying himself with the raw material of bones; walking all the while he talks behind his oxen, which, with vegetable-made bones, jerk him and his lumbering plow along in spite of every obstacle.  ~ …Henry David Thoreau

A veteran USDA meat inspector from Texas describes what he has seen:  “Cattle dragged and choked… knocking ’em four, five, ten times.  Every now and then when they’re stunned they come back to life, and they’re up there agonizing.  They’re supposed to be re-stunned but sometimes they aren’t and they’ll go through the skinning process alive.  I’ve worked in four large [slaughterhouses] and a bunch of small ones.  They’re all the same.  If people were to see this, they’d probably feel really bad about it.  But in a packing house everybody gets so used to it that it doesn’t mean anything.”  ~Slaughterhouse 1997

It is only by softening and disguising dead flesh by culinary preparation that it is rendered susceptible of mastication or digestion, and that the sight of its bloody juices and raw horror does not excite intolerable loathing and disgust. ……… Percy Bysshe Shelley,

Can you really ask what reason Pythagoras had for abstaining from flesh?  For my part I rather wonder both by what accident and in what state of soul or mind the first man did so, touched his mouth to gore and brought his lips to the flesh of a dead creature, he who set forth tables of dead, stale bodies and ventured to call food and nourishment the parts that had a little before bellowed and cried, moved and lived.  How could his eyes endure the slaughter when throats were slit and hides flayed and limbs torn from limb?  How could his nose endure the stench?  How was it that the pollution did not turn away his taste, which made contact with the sores of others and sucked juices and serums from mortal wounds? Plutarch 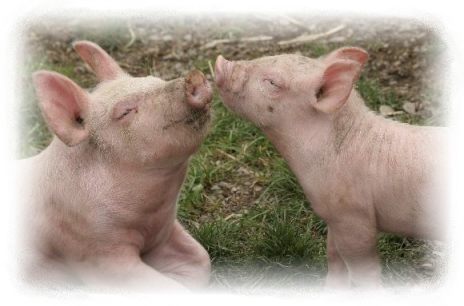 We manage to swallow flesh only because we do not think of the cruel and sinful thing that we do.  Cruelty… is a fundamental sin, and admits of no arguments or nice distinctions.  If only we do not allow our heart to grow callous, it protests against cruelty, is always clearly heard; and yet we go on perpetrating cruelties easily, merrily, all of us – in fact, anyone who does not join in is dubbed a crank.  ~Rabindranath Tagore

I just could not stand the idea of eating meat – I really do think that it has made me calmer….  People’s general awareness is getting much better, even down to buying a pint of milk:  the fact that the calves are actually killed so that the milk doesn’t go to them but to us cannot really be right, and if you have seen a cow in a state of extreme distress because it cannot understand why its calf isn’t by, it can make you think a lot.  ~Kate Bush

Nothing more strongly arouses our disgust than cannibalism, yet we make the same impression on Buddhists and vegetarians, for we feed on babies, though not our own.  ~  Robert Louis Stevenson 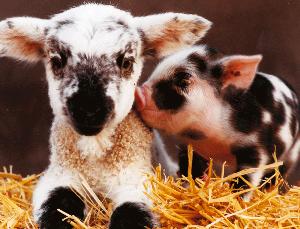 If slaughterhouses had glass walls, everyone would be a vegan.  ~   Paul McCartney

The soul is the same in all living creatures, although the body of each is different. ~ Hippocrates

The question is not, Can they reason? nor Can they talk? but Can they suffer? ~ Jeremy Bentham

But for the sake of some little mouthful of flesh we deprive a soul of the sun and light, and of that proportion of life and time it had been born into the world to enjoy. ~ Plutarch

Isn’t man an amazing animal?  He kills wildlife – birds, kangaroos, deer, all kinds of cats, coyotes, beavers, groundhogs, mice, foxes and dingoes – by the million in order to protect his domestic animals and their feed.  Then he kills domestic animals by the billion and eats them. This in turn kills man by the millions, because eating all those animals leads to degenerative – and fatal – health conditions like heart disease, kidney disease, and cancer. So then man tortures and kills millions more animals to look for cures for these diseases.  Elsewhere, millions of other human beings are being killed by hunger and malnutrition because food they could eat is being used to fatten domestic animals.  Meanwhile, some people are dying of sad laughter at the absurdity of man, who kills so easily and so violently, and once a year, sends out cards praying for Peace on Earth. 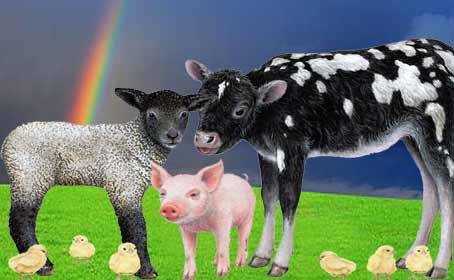 For more information go to:

Consider this:  Imagine that you had grown up in a society that killed some of it’s children behind closed doors, but that until you suspected what was going on, perhaps as you got older, you knew nothing of the tortures and horrors that were happening.  Then one day, you found out.  Would you stop buying-in to the sick system and try to do something about it?  Or would you just pretend that you didn’t really know or care and carry on as before?

If in doubt about something that you do in life, use empathy – put yourself (or one of your children) in the position of the one in question.  Imagine you or your child as a calf or a lamb etc. They feel pain and fear in the same ways we do.  They grieve.

Does it still feel ok?

BE THE CHANGE YOU WISH TO SEE IN THE WORLD!

For yourself,  for the animals,  for your soul!

This website uses cookies to improve your experience while you navigate through the website. Out of these, the cookies that are categorized as necessary are stored on your browser as they are essential for the working of basic functionalities of the website. We also use third-party cookies that help us analyze and understand how you use this website. These cookies will be stored in your browser only with your consent. You also have the option to opt-out of these cookies. But opting out of some of these cookies may affect your browsing experience.
Necessary Always Enabled
Necessary cookies are absolutely essential for the website to function properly. This category only includes cookies that ensures basic functionalities and security features of the website. These cookies do not store any personal information.
Non-necessary
Any cookies that may not be particularly necessary for the website to function and is used specifically to collect user personal data via analytics, ads, other embedded contents are termed as non-necessary cookies. It is mandatory to procure user consent prior to running these cookies on your website.
SAVE & ACCEPT